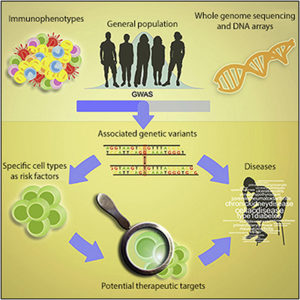 Numerous studies have reported that certain diseases and quantitative variables of biomedical relevance such as height, or body mass index or levels of sugar in the blood are, to some extent, inherited. According to a team of international researchers led by Francesco Cucca, director of the National Research Council’s (CNR) Institute of Genetic and Biomedical Research (IRGB) in Sardinia, Italy, genetics also plays an important role in immune cell levels. The new findings are published on the 26th of September in the journal Cell.

It was well known that many measurable features of our bodies run in families. This study shows that immune cell levels in the blood are  also inherited in families  and that specific genes and DNA sites have highly significant effects on the levels of one or more particular types of immune system cells. Furthermore, the findings reveal that a number of these specific DNA changes are also implicated in risk for various autoimmune pathologies, including ulcerative colitis, type 1 diabetes, multiple sclerosis, rheumatoid arthritis, and celiac disease. Hence, the study extends previous knowledge demonstrating the involvement of specific immune cells in particular autoimmune diseases.

In particular, the research team tested the role of genes in the levels of immune cell levels using a genome-wide association study, looking at approximately 8.2 million DNA sites in blood samples taken from 1,629 volunteers and extending the most interesting results to a total of 2,870 individuals from four nearby Sardinian villages who are part of the SardiNIA longitudinal study, a joint effort directed by Francesco Cucca along with David Schlessinger at National Institute on Aging (NIA) in Baltimore and Goncalo Abecasis at the University of Michigan in Ann Arbor.

“In the analyses we identified 23 independent DNA sites associated with immune cell characteristics. Most of these associations were previously undiscovered, although a few had been suggested in other studies without firm statistical significance” Maristella Steri , statistician at the IRGB-CNR and the other first author of the study said. The researchers compared their findings with data in public repositories and, in some cases, found that these genes had already been associated with autoimmune disease.

This finding is the most recent of several discoveries made by the SardiNIA study itself and in conjunction with other groups in international consortia. Previous findings identified gene associations with height, fasting blood sugar, cholesterol and other fats in the blood, beta-thalassemia (a blood disorder), and uric acid levels, which can contribute to gout and risk of heart and kidney disease.

One of the unique features of the investigation is its study population—the Sardinians. “The lineage of most contemporary Sardinians goes back to the Mediterranean island’s original settler population that began to expand about 8,000 years ago and contains most of common genetic variants present in the first European settlers as well —and an ideal group for genetic research”, said Francesco Cucca, who also led another study on the genetic structure of the Sardinians from the same team published on August the 2nd in Science, “we have now learned that in case after case, findings in Sardinia have been applicable world-wide. In this case, understanding the genetics behind immune system regulation and autoimmunity may have future implications on developing new and more effective therapies for autoimmune diseases”.